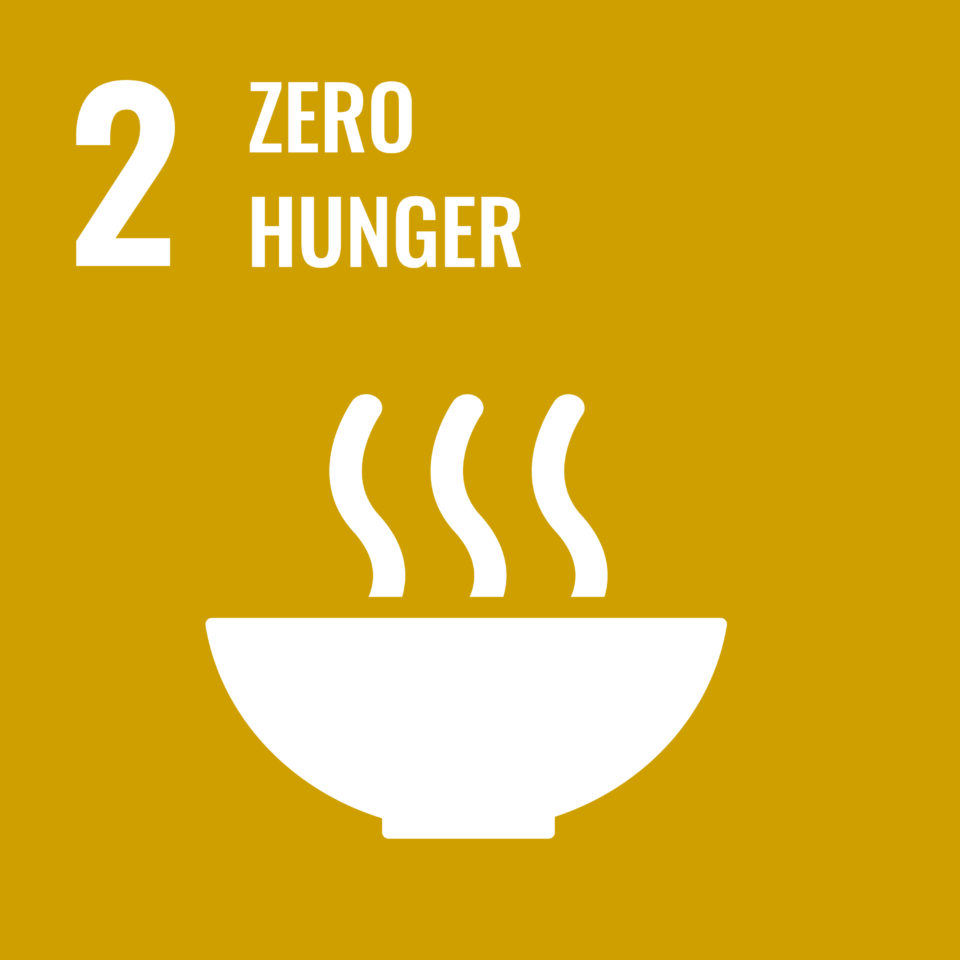 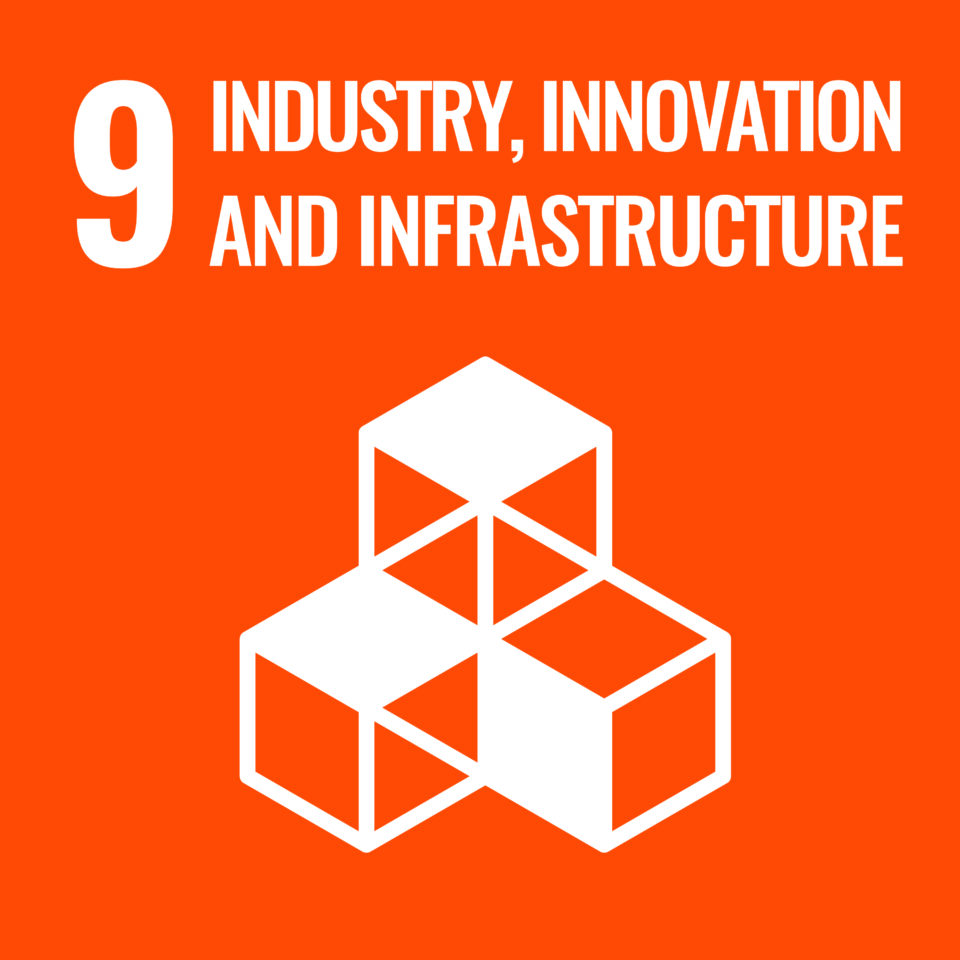 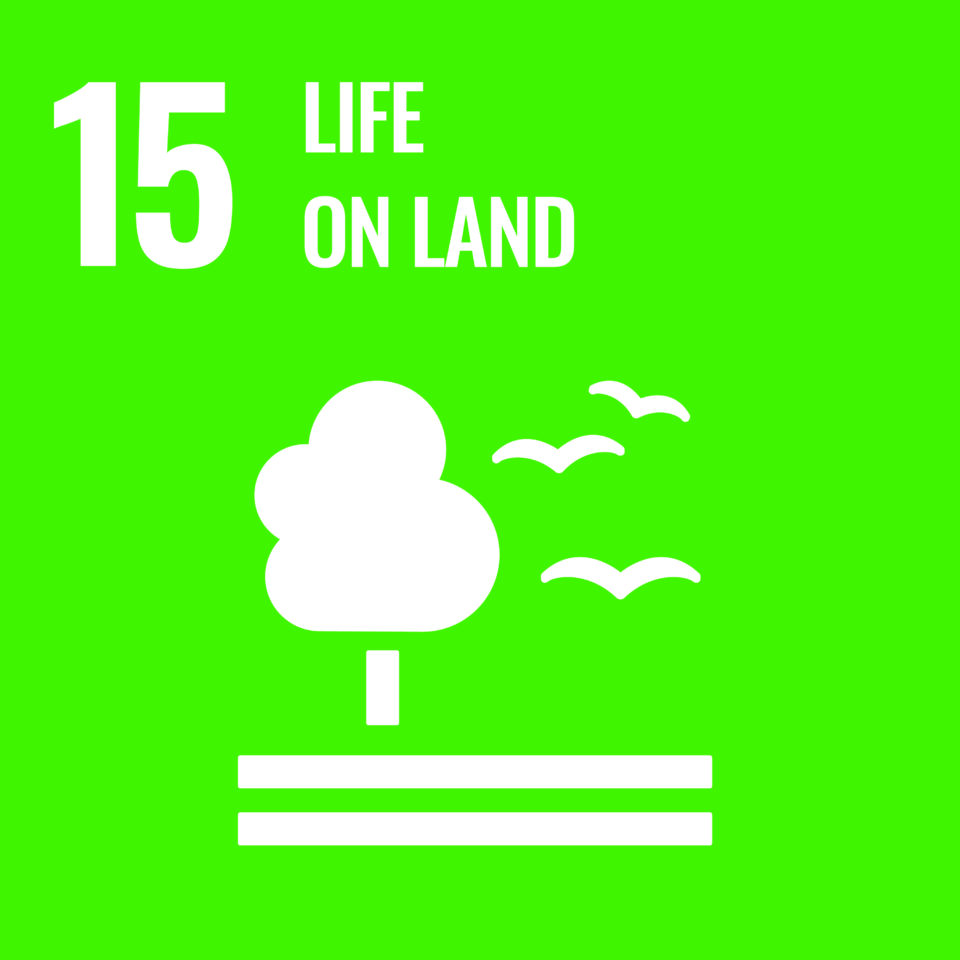 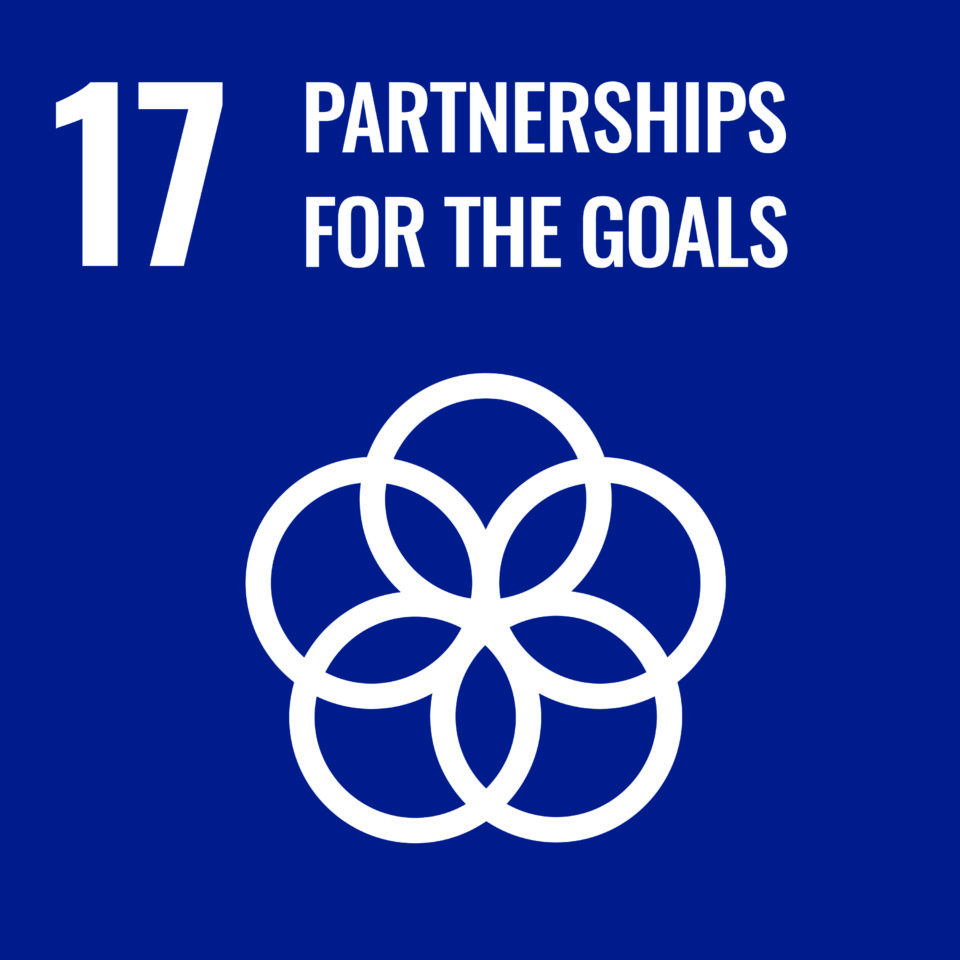 Rice is a plant of subtropical origin and cold disorder is a major problem in rice cultivation in Hokkaido. Rice is said to be the lowest temperature weakest in the booting stage, two weeks before flowering. Most studies find and introduce resistance genes from the idea that plants respond positively to various stresses to obtain resistance. We discovered an example different from the conventional way of thinking ‘Donkan Ryoku’ (low temperature insensitivity) which shows stress tolerance by not feeling low temperature stress. In addition, lower temperature disorders are effective not only for improving cold tolerance at the booting stage but also at low temperatures from late summer to autumn due to early birth. Therefore, we investigate the relation between photoperiod and temperature condition and growth rate and try to deepen the understanding of adjustment of heading period. (Y. Kurasawa, K. Yamamori, S. Sakaguchi, S. Kikuchi) 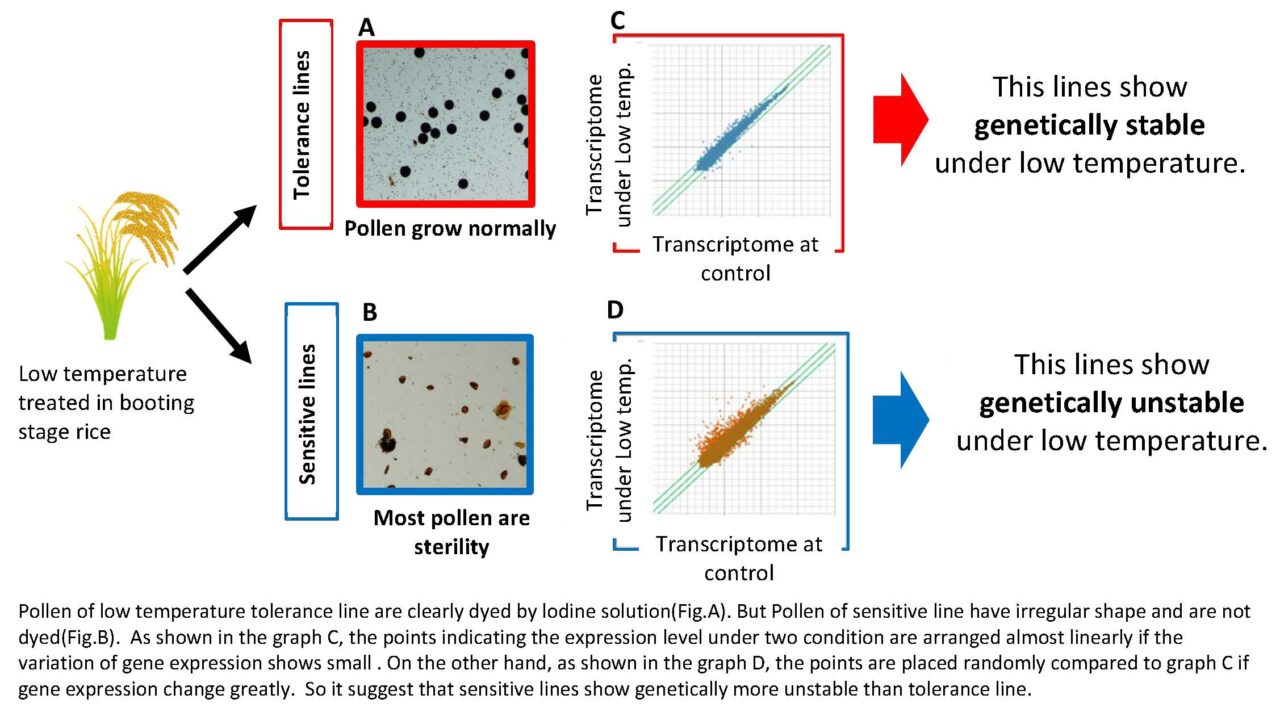 Transposition of transposons is one of the phenomena creating gene mutation, which is important for plant breeding. In Antirrhinum majus, when the transposon Tam3 transposed from a certain locus, a pigment gene begins to express and the flower colour changes. This transposition is promoted under cold conditions. In our laboratory, we analyze the mechanism by which Tam3 is transposed on the genome. Our final goal is establishing transposons as a new method of plant breeding. 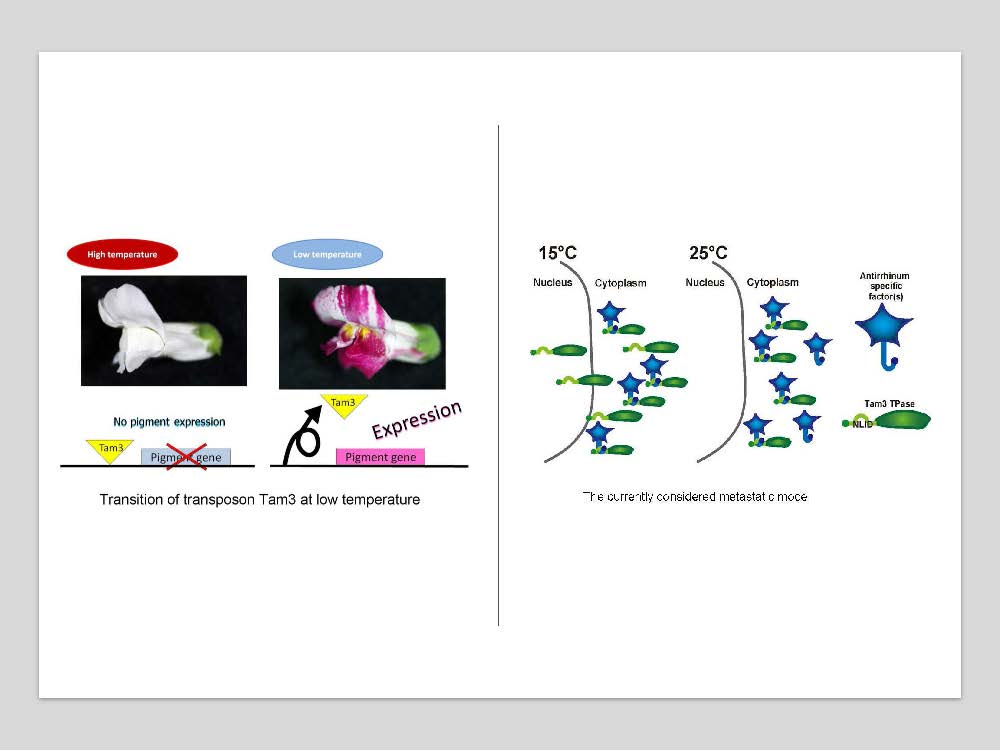 Analysis of regenerated plants and the mechanism of microspore dedifferentiation through anther culture.

Do you know what will happen when culturing rice anthers filled with pollen? Callus (undifferentiated plant cell) appears and grows to regenerated plants. These regenerants have almost similar traits like normal parent plants, but due to somaclonal variations, some of the regenerated plants show some specific characteristics, including albinism and higher ploidy levels. That is why these regenerants are useful as research targets to investigate the plant’s mechanism of reproduction and growing process. Through “anther culture” approach, our team has got successes to produce high ploidy (tetraploids) rice lines and regenerants from sterile F1 hybrids between Asian and African cultivated rice. We have also made efforts to observe meiotic abnormalities of high ploidy rice and uncover the mechanism of callus induction and genotype differences in albinism frequencies. 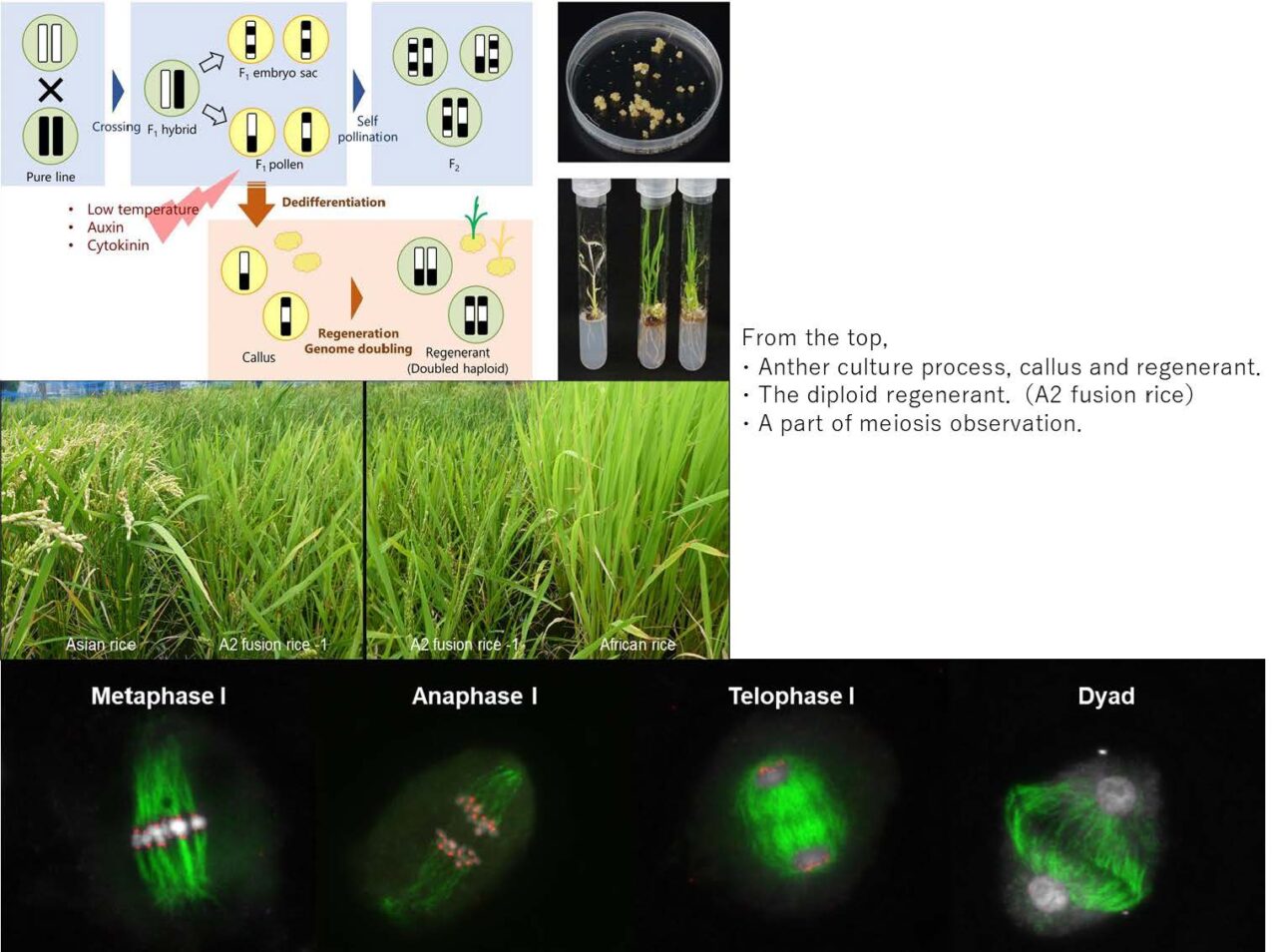 The species barrier, known as the reproductive barrier, acts to prevent the exchange of genes between species. The barrier also prevents the creation of new crops through interspecific crossing in breeding.
We use hybrid sterility in rice as a model case of the barrier to understand its molecular mechanisms, its evolution, and the way to overcome it. Focusing on the hybrid sterility observed in Asian and African cultivated rice species, we aim to identify the causal genes and create a new allele ,which can avoid the sterility through mutagenesis and genome editing. 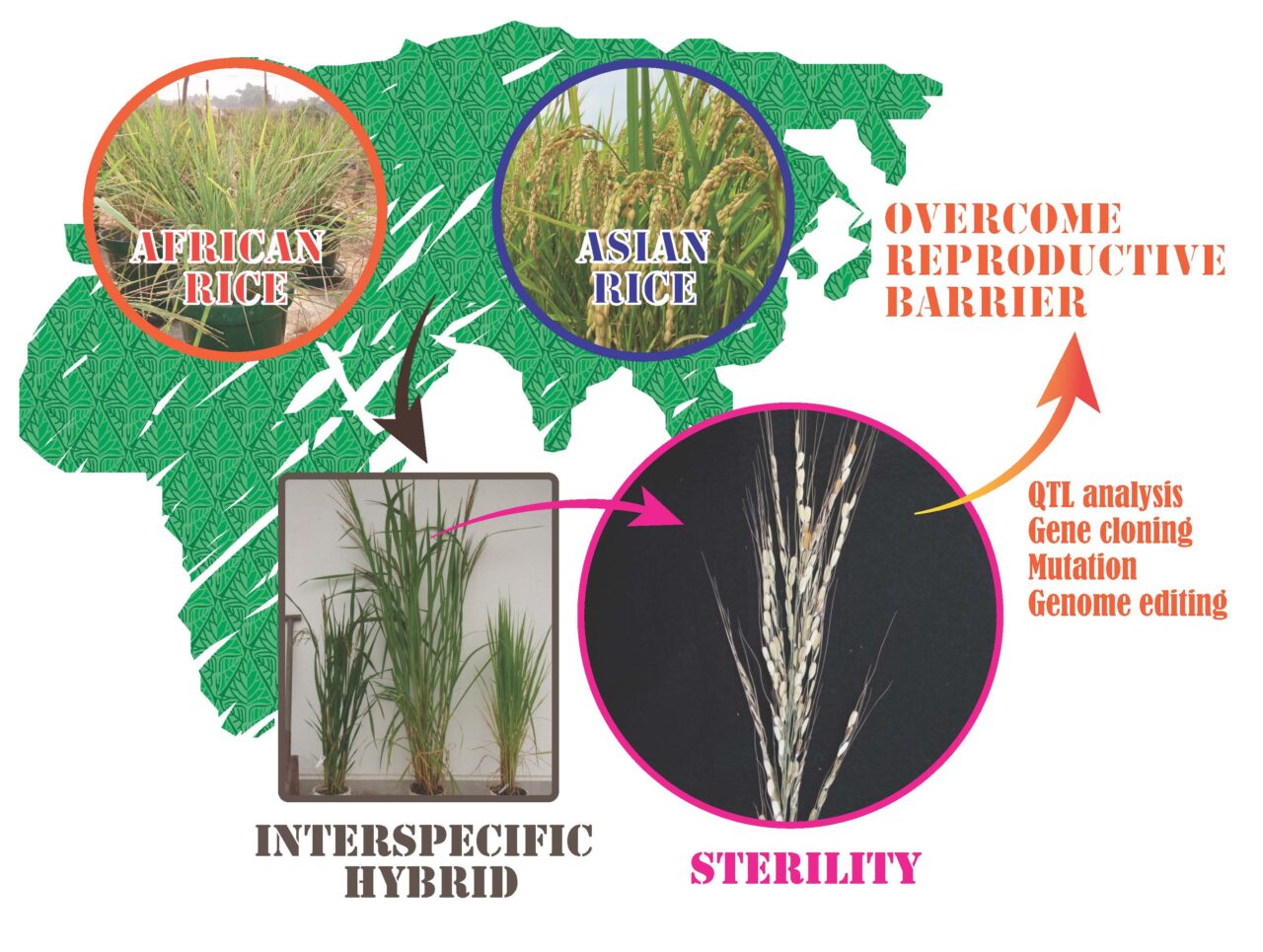 Mutants are important materials for genetic and breeding research, therefore we induce and select various mutants. In mutants, genes are altered, resulting in loss of gene function or diminished function. By examining these mutants, we will be able to recognize and investigate the gene for the first time.

Rice leaves and spikelets are important traits related to rice yield. Many genes act on these formations. Examining the function of these genes is an important research subject as the basis of breeding, and we are conducting research using various mutants related to rice morphology.

A) A zebra mutant showing leaves with horizontal stripes of chlorosis during the seedling stage in rice. (B) Various malformed spikelets in the progeny of crossing between mutants that cause malformations in the spikelet structure in rice. (C) Testing of mutants with variations in seed size. (D) Cultivation and selection of mutants in paddy fields. 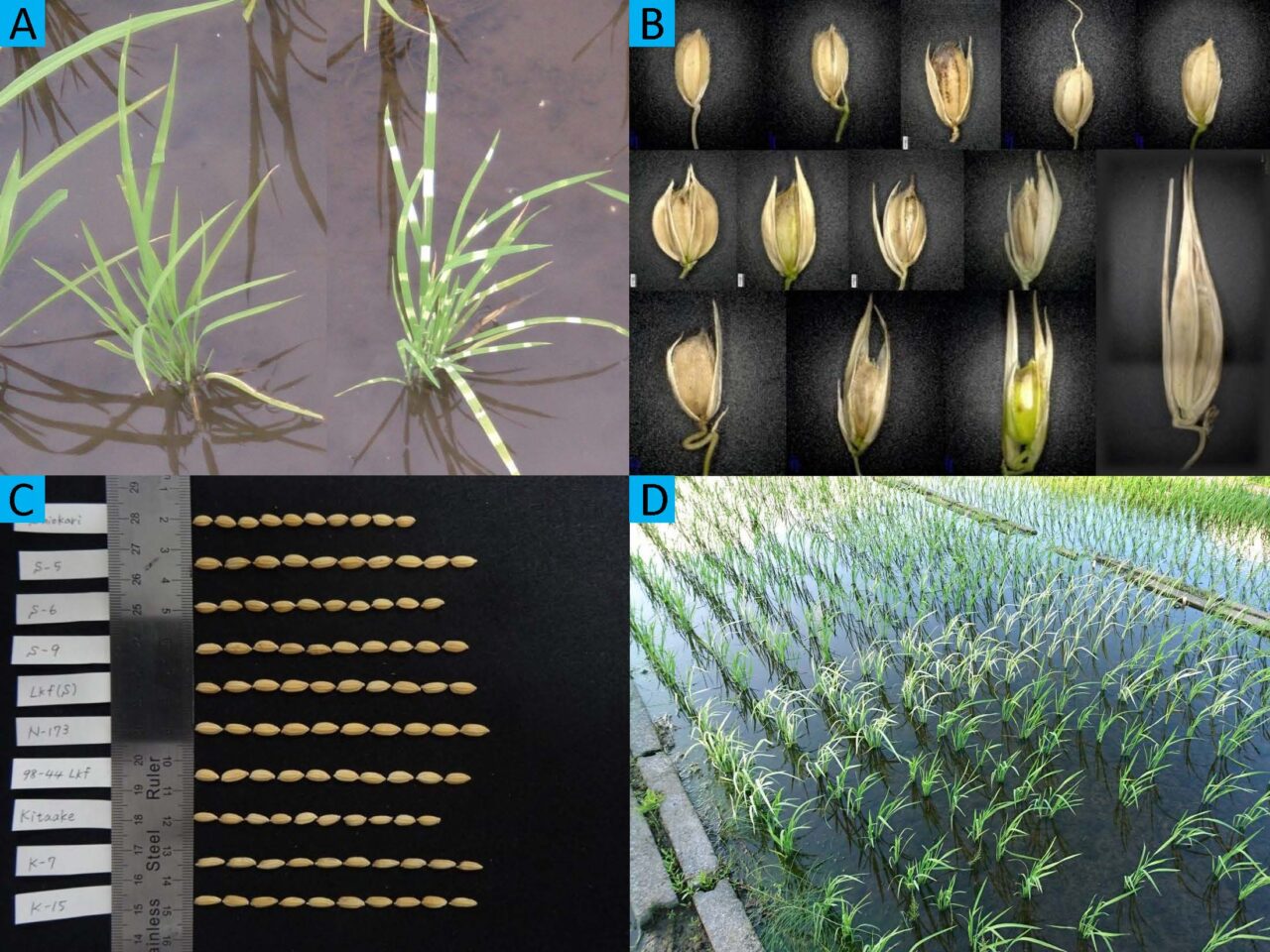 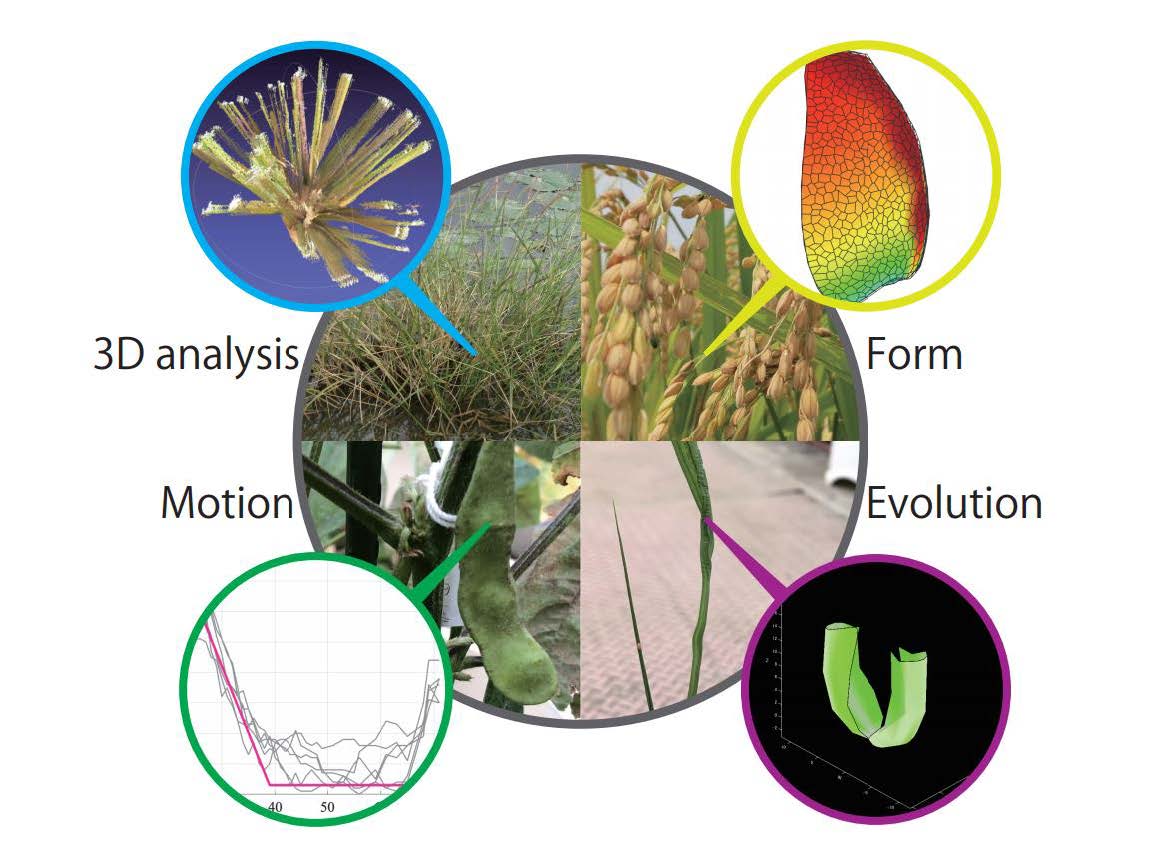 Hokkaido is a major producer of rice, boasting Japan’s largest crop acreage and yield. Most rice grown in Japan is from the Japonica variety, which has a rounder pill-like shape and stickier texture compared to the Indica or Javanica varieties.

Rice cultivation in Hokkaido has developed over the years by overcoming the harsh climate that includes cold temperatures and heavy snowfall. Since the variety called Kirara 397 debuted in 1989, breeding has been used to develop other types of Hokkaido rice that taste better and withstand the cold climate better. The Nanatsuboshi and Yumepirika varieties are highly acclaimed for their glossy appearance, sticky texture and great balance of sweetness. Both have received the Toku-A ranking, the highest possible, in taste tests performed by the Japan Grain Inspection Association. Currently, Hokkaido is cultivating rice in a more safe and secure manner by taking advantage of its colder climate to use less agricultural chemicals.